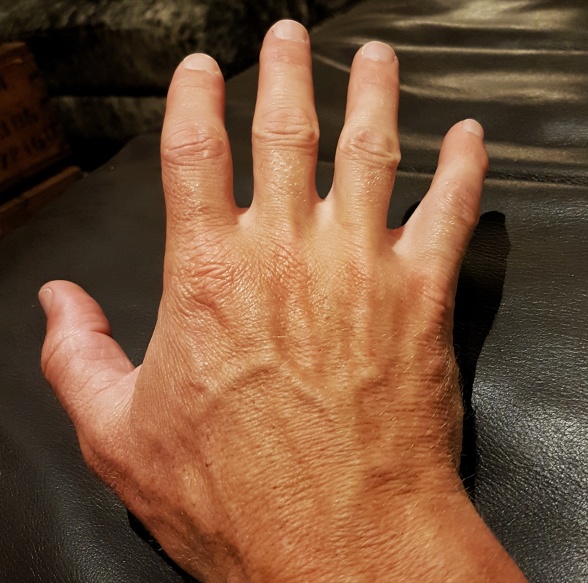 I can still feel it, where it was.  I want to fiddle with it absentmindedly, turning it around my finger with my thumb. I hold a mug or a glass and want to tap against it, a subliminal reminder that it is there.

I wore it with such pride, such love, for everything it represented.

I woke at 02:47 that morning to the sound of armed men breaking into my home.

The low, antagonistic, guttural tone, “the ring…give it to me.” The hostile eyes looking at me through a dark grey balaclava, the gun trained on my head. The place on my head where the barrel of the same gun had pushed my head into the mattress for an interminable time still throbbed. The terror that accompanied that act of aggression forcing me into submission.

I slipped the worn and battered, white gold symbol off the pinkie finger on my right hand, for the first time in many years. As I held it out I felt a great sense of loss and defeat. I was told to toss it on the bed.

Of course, it wasn’t the first time it was removed. I took it off after three long, hard years of fighting to save a marriage that had died five years before that day. A sad mismatch. Two people who shared many precious memories – but as many moments of hurt, disappointment and miscommunication.

The day I removed that ring remains one of the saddest days of my life. Everything I never wanted.

Two moments in time, seven years apart, both emotional troughs in the sea of life.

After my divorce, I had my wedding band resized to fit the furthest finger from my wedding finger. I had read a quote whilst grappling with the idea of divorce. “despite all thoughts to the contrary, our marriage is not a failure, we have three beautiful children to show for it.”

I wanted to remember all the good about our marriage. The love, the conscious decisions to have each of our girls.  I have always wanted our girls to know that they were borne out of love, that they were wanted, how precious they are…how hard it was to conceive. The two fetuses lost in-between our beautiful little souls. How badly we wanted them, and how important they are to us.

I wanted them to see a symbol, never removed, that represented them. No matter what followed; their parents who could not make a marriage work, but who both love them more than anything!

I have had to fight for every bit of access I have to them. Even though the divorce order stipulates that we are equal parents. They have been their mother’s collateral and her leverage.

That ring was my struggle for my girls. A determined tenacity in me that divorce would not dictate the story of their lives, but merely a chapter. A fight for their right to a father who loves them beyond all else.

Bailey played with it often, turning it around my finger. Knowing that it was a direct link to my heart, and my love for her. Mackinnon noticed immediately on the one occasion I took if off because I was carrying heavy concrete wall panels that were scratching it.

They both knew exactly what it meant to me and to them. How significant it was to me.

It remains the one thing that I cannot possibly replace.

I have endured so much loss over the past decade. My wedding ring… the one thing I valued above all else… gone. Added to a very long list.

But then I consider that a symbol means a lot less than making sure that my girls always know how loved they are by their dad. Unconditionally and unreservedly, exactly as they are. That they know that they are perfect, and that most importantly…they don’t need to do nor be anything to be loved…

They are my everything.

4 thoughts on “My wedding band.”